An urgent warning to stone fabricators to stop dry cutting engineered quartz has been issued to fabricators in Australia by the Queensland government. This is following 26 recent new claims of compensation for silicosis due to exposure to stone dust.

This has prompted Grace Grace, the Industrial Relations Manager, to issue a statement advising employers to immediately stop the dry cutting of engineered quartz and threatening enforcement for those found failing to protect its employees from overexposure to this harmful dust.

Silicosis is an aggressive form of pneumoconiosis, a potentially fatally debilitating respiratory disease by the inhalation of silica stone dust. Stone dust contains RCS (Respirable Crystalline Silica) and is what can lead to developing diseases such as silicosis, cancer and COPD (Chronic Obstructive Pulmonary Disease).

Through using the correct and appropriate controls, workers are only exposed to a very small amount of this harmful dust each day, much less than those without the same protective equipment. The failure to protect yourself results in a significantly larger amount of high concentrations of Silica inhaled.

We have already covered the dangers of Respirable Crystalline Silica in our post: Understanding the Dangers of Stone Dust. 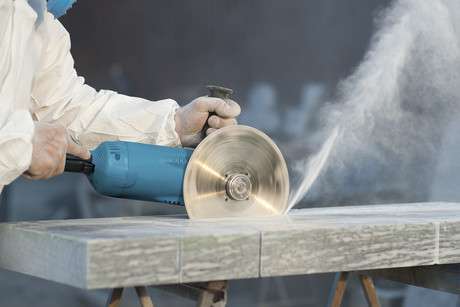 This sudden spike caused the number of claims for compensation rose to 26, six of which regrettably had confirmed cases of progressive Massive Fibrosis, which is the final stage of the disease and is fatal.

This shocking discovery is made worse by the fact this could have been preventable with better control of the dust through using the correct PPE and switching to wet cutting.

This discovery has prompted the WHSQ (Workplace Health and Safety Queensland) to audit all stone processors in Queensland, working towards creating the necessary regulations to completely prohibit the dry cutting of stone.

In the UK, the current HSE regulations require fabricators to take steps to control the risks from stone dust exposure under the control of substances hazardous to health regulations 1999 (COSHH), with fines in place for those failing to protect their workers from overexposure.

Wet cutting, drilling, grinding and polishing will significantly reduce the amount of stone dust in the air, as it instead forms a slurry, however it is still advised to wear PPE to reduce this risk further and better protect stoneworkers.

With the Australians new stance on this prominent issue, could the UK be the next in line to follow suit?